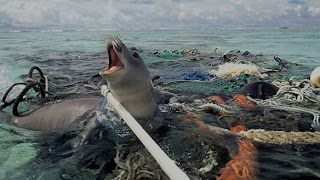 The Santa Cruz Sentinel, my hometown newspaper, carried the following letter to the editor in its Wednesday, August 1st edition:

A year ago, I met Laura Kasa, from Save Our Shores. I'd never really thought about the threat of plastic pollution to our oceans, but Laura changed that. Together, we passed a styrofoam ban for Salinas; it only took us six weeks. Now, a year later, we just met with Assemblyman Luis Alejo's chief of staff to discuss Senate Bill 568, for a statewide ban on polystyrene food ware. Mr. Alejo doesn't support the bill -- that raises serious concern and doubt about his environmental views and commitment to protecting the Monterey Bay National Marine Sanctuary and Big Sur coastline. After that meeting, sensing my frustration, Laura shook her head: "Matthew, you don't really think we're going to change the world in just one-year do you?" There was a pause, we both smiled, I didn't need to respond, Laura knew my answer. It's our world to change, please support SB 568.

Here's what I liked most about this letter: "It's our world to change..."

Of course, I like Laura Kasa and Save Our Shores, too. And I'm a supporter of SB 568, authored by State Senator Alan Lowenthal. But what I really liked about this letter was its matter of fact recognition of what I think of as an important philosophical insight: we live, most immediately, in a world that we create, and the kind of world that we create will either conform to the world of Nature, upon which we ultimately depend, or not. It's our choice. "Legislation," in fact, is one important way that we tell ourselves what to do, and by this action help create the kind of world in which we want to live. Hopefully, that will be a world that will let the oceans live, too!

If you want to communicate your thoughts on SB 568 to Assembly Member Alejo, who represents the Watsonville and Salinas areas in the California State Assembly, you can contact him through his website.

It's our world to change.