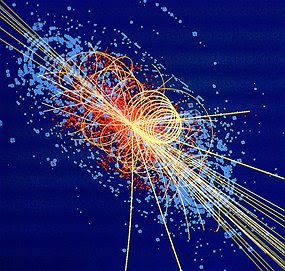 I must confess that I have not yet finished reading Connected, a book that tells us that our "friends' friends' friends" affect everything we feel, think, and do. I am pretty confident, however, having gotten as far into the book as I have, that while Connected outlines convincing evidence that the above proposition is in fact the case, a "mechanism" to demonstrate exactly "how" those effects are produced is not really provided.

While it may be a stretch, and while the authors of Connected don't draw the parallel, it seems to me that the phenomenon that Connected discusses could well be formulated along the lines of Carl Jung's collective unconscious. Jung, posited "connections" between human beings and other living beings in the Natural World. He, too, made observations about visible truths, and "postulated" something that would account for them. His "collective unconscious" was a hypothesis intended to explain phenomena that would otherwise be unexplainable.

We do seem to be "connected," and with all living things, not just with our "friends' friends' friends." The exact "mechanism" of this connection, though, has not yet been definitively identified. At least, if it has, I've missed the news.

Recently, in the world of physics, scientists seem to have been able to take a "snapshot" of a particle that has been posited as "making it possible for the physical world to exist." That is exciting news. What is exciting is not that there now may be a "proof" that the universe exists, because that does seem pretty evident, even to non-physicists. What is exciting is to put a finger on the "mechanism."

It would be nice to find the "Higgs Boson of Connection," and maybe someday we will. In the meantime, the fact that we are all connected, and all in this together, remains evident, even without the identification of the exact "mechanism" by which this connection operates. Since the reality of our connection with each other and other living beings does seem evident, I conclude that we should conduct ourselves as if we believed it. That could change what we do!