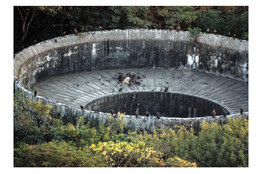 Click here, or on the image, for a book review of Life Everlasting by Bernd Heinrich. The book review appeared in the July 6, 2012 edition of The Wall Street Journal. The picture is of a "dakhma" in Mumbai, India, where local Zoroastrians leave their dead to be consumed by vultures.

I was told, by a friend who had been in India, that the system is not working as well as it might. Pesticide pollution, contained within the bodies of animals and humans subjected to this kind of "recycling by vulture," has been killing off the vultures.

"Our" creations, synthetic chemicals, are disrupting cycles of nature that have operated since the beginning.