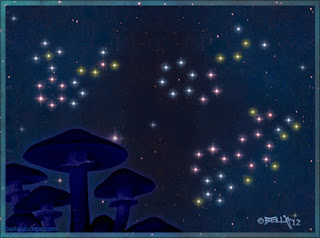 A recent article proclaimed that "billions and billions of new psychedelic drugs are just waiting to be discovered - and what kind of an effect they'll have on us, and the world, we can only imagine."

I am willing to believe that there are more psychedelic possibilities out there than stars in the sky, but I am forced to ask, "is it a good idea to pursue them?" If you trust the dictionary (see below), the word "psychedelic" refers to phenomena that are "hallucinations," even though those hallucinations may appear to be an "expansion of consciousness."

Heretofore, I have avoided any experiences with the worlds revealed by psychedelic substances. I plan to continue my commitment to the two worlds I think are "real," the world of Nature and the "political world" that we create.

Tempting as it might be to seek an escape from these worlds, and to embark upon an exploration of a limitless inner universe, I do believe (trusting the dictionary) that the inner universe accessed by psychedelic drugs is mainly a world of hallucination.

Adjective
Relating to or denoting drugs (esp. LSD) that produce hallucinations and apparent expansion of consciousness.