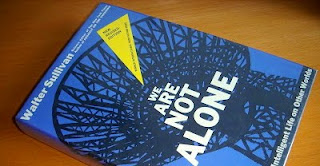 Walter Sullivan spent most of his career as a science writer for the New York Times. Among his books is We Are Not Alone, which Wikipedia identifies as a "bestseller about the search for extraterrestrial intelligence."

I, personally, don't think there is a lot of value in searching the reaches of the Universe for "extraterrestrial intelligence." Instead of spending billions of dollars looking for intelligence somewhere else, I'd suggest trying to develop our own intelligence, right here on Planet Earth.

I do like Sullivan's title, though: "We Are Not Alone." That strikes me as correct.

Right here, on Planet Earth, we are together through life (which just happens to be the title of a Bob Dylan album released in 2009).

It is always good to listen to Bob Dylan. That's an intelligent thing to do.

It would also be intelligent to keep remembering that we are not just a bunch of individuals. As Dylan hints, we are in this together.