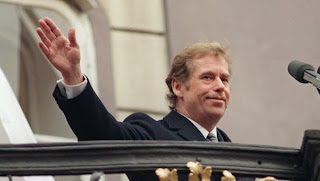 The April 9, 2012 edition of The Nation magazine has an excellent article on Vaclev Havel,