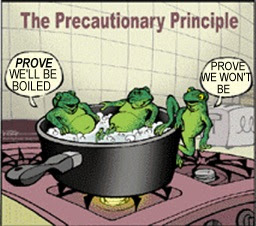 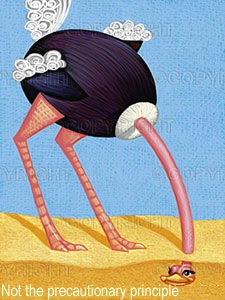 The precautionary principle states that if a policy (or action) has a suspected risk of causing harm, in the absence of a rational consensus that harm will not occur, the burden of proof falls on those who would advocate the policy (or action).

Effectively, this allows policy makers to make discretionary decisions in situations where there is evidence of potential harm in the absence of complete proof.

The principle implies that there is a responsibility to intervene and protect people from exposure to harm where there is a plausible risk.

Santa Cruz County residents who want to know how to incorporate this precautionary principle into the laws and regulations that guide local government should mark their calendars for a presentation on Friday, April 20th. On that date, from 7:00 to 9:00 p.m., the Santa Cruz County Branch of the Women's International League For Peace And Freedom and Cabrillo Earth Week will sponsor a discussion of the precautionary principle in the Cabrillo College Forum.

Human beings have an immense pride in their own ability to create new realities. That is one of the glories of our human existence. Without due humility before the World of Nature, however, upon which all of our human works ultimately depend, we can put not only our own world, but even the Natural World itself, at immense risk.

A topic worth pondering.