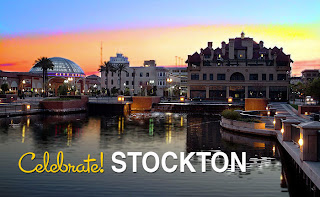 I regularly read Connections Magazine, published by the Peace & Justice Network, based in Stockton, California. The April 2012 edition of Connections (not yet available online, as I post this) contains a sobering article by Wendi Maxwell. Maxwell indicates that there is a lot less to "celebrate" in Stockton than one might gather from looking at the website of the real estate search company from which I got the image I am using in today's post. (You can click the image to get the reference).

According to Maxwell's article, city leaders have declared that Stockton will soon be unable to pay its debts; there is not enough money to carry the city through June, and to achieve the savings needed, by laying off employees, approximately 600 employees would have to be laid off, out of a total workforce of 1400. To summarize: "unless something drastic is done immediately, the city will face bankruptcy." City leaders are now trying to use a recently enacted state law, AB 506, to negotiate with the city's creditors.

Stockton got to where it is today by basing its decisions on an expectation that the economic boom times that began in the mid-1990's would never end. According to Maxwell, the projects that city leaders undertook (including the marina pictured here) apparently struck some members of the Stockton community as "grandiose." Nonetheless, the elected officials just forged ahead, anyway. They weren't thinking about having to make do with "less."

I am from a different town, Santa Cruz, and while the economic situation here is not good, my city is not as bad off as Stockton. Even so, there have been lots of service cutbacks, and employee pay cuts, and there certainly is no guarantee that things will get appreciably better, going forward. At this juncture in our city history, despite real experience with the need for fiscal restraint, city officials appear ready to invest over $2 million dollars of the city's "deep financial reserves" to build a tent auditorium to provide a home (at the cost of local taxpayers) for a "D" league basketball team, associated with the Golden State Warriors, that is now based in Bismarck, North Dakota.

Before committing the thin financial reserves of the City of Santa Cruz to a project that many city residents might well find a little "grandiose," I hope that city officials will think about the plight of Stockton, where bad choices have led the city to the brink of bankruptcy.

Learning to live with "less," rather than to develop "more," may be an all-around good principle. Better to get there voluntarily, rather than by necessity.