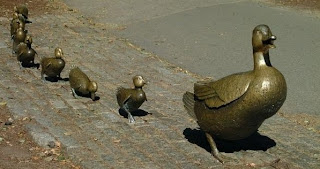 A recent article in the New York Times reported on a study finding that "today's young Americans are less interested in the environment and in conserving resources — and often less civic-minded overall — than their elders were when they were young."

The San Diego State University professor who carried out the study professed herself "shocked," but I don't think that she should have been. The "Make Way For Ducklings" duck parade in the Boston Commons says it all.

Young creatures "imprint" upon (and follow) the adults they discover upon coming to consciousness. In our time, those notable adult models, from former President George Bush on down, have been a gaggle of corporate and political and academic leaders who say that pursuing projects devoted to the achievement of selfish interests is the sine qua non of the good life, and the right way to conduct oneself.

As long as we don't have leaders who have sorted out the right relation between "We" and "Me," and who act accordingly, our young people will be following along in the train of those who resemble real human beings, but whose hearts and souls are made of brass.