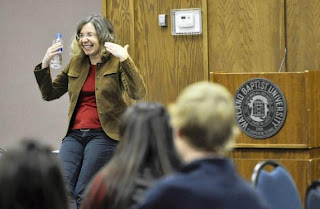 Pictured is Katharine Hayhoe, speaking about climate change to students and faculty at Wayland Baptist University in West Texas. She's a climatologist and an evangelical Christian.

Hayhoe has been in the news recently because she wrote a chapter about global warming for a book on environmental issues authored by Newt Gingrich. He cut the chapter, as the Republican Party caucuses in Iowa came close, and as his position on global warming "evolved," if we can use that word without too much sarcasm seeping through.

Reportedly, Hayhoe has been inundated with vindictive and sometimes disturbing hate mail from climate change deniers, which some suggest may have been encouraged by conservative operatives. The controversy about the dumped chapter in the Gingrich book led to a thoughtful opinion piece in the Sunday, February 5th San Francisco Chronicle, titled "Science and Politics: How we resolve the climate change impasse." The main point of the article was that a science-based view of the world will ultimately win over an ideological or opinion-based view, since science reports on "facts," which cannot be changed, and the truth of which ultimately becomes evident (even if too late, perhaps, for an acknowledgement of the facts to be of help to us as we fashion our own behavior).

It's a good example of confusing the world of nature with the world that we create ourselves. In our human world, anything is possible. In the world of Nature, a world upon which we ultimately depend, there actually is such a thing as the truth.