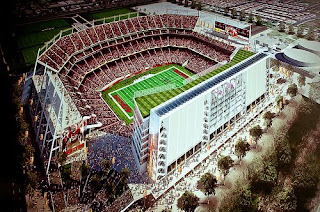 An article in the San Francisco Chronicle on Tuesday, January 31st, began with these stirring words: "The California Constitution says all political power 'is inherent in the people....'"

The article then went on to explain why this might not really be so.

Voters in the City of Santa Clara who would like to have a vote on whether or not the City should subsidize the construction of a new stadium for the 49ers have gathered enough signatures to qualify an initiative measure for the ballot. If the voters have the "inherent" political power to decide what they want to do with their city government - and even to change their minds about that - you would think that properly qualifying a city initiative ought to mean that the people will vote. Not necessarily. The City Council has refused to put the measure before the voters, despite the fact that the initiative sponsors have gathered enough signatures. The Council has relied upon an opinion of their City Attorney in doing so.

According to the City Attorney, the inherent power of the people, guaranteed in the Constitution, extends only to "legislative" matters, and the voters have already legislated on this topic. The people voted for the stadium once, and the City Attorney says that everything thereafter is just "administrative," not subject to change by a voter-qualified initiative measure.

More and more often, this claim that initiatives are improperly attempting to give "administrative" directions (a claim which has received significant support in the courts) is relied upon by elected officials to turn back efforts by the voters to exercise their "inherent political power." I wouldn't be surprised, in fact, to hear this exact claim from officials of the City of Santa Cruz, if a "let the people vote on desalination" initiative gets sufficient signatures. We will have to see about that. We will also have to see about what happens in the City of Santa Clara, with respect to the initiative petition on the 49er stadium. I expect this matter will be tested in the courts, and the outcome of such a court test can't really be predicted very well.

Whatever the courts say about the Santa Clara initiative, there is no doubt that there are significant limits on the "inherent political power" of the people to legislate directly. Be warned. It really does matter who we elect to to govern our cities and our counties. In effect, the whole point of representative democracy is that we give up to our elected officials the "inherent political power" of the people. Once we elect them, they have that power (which they got from us). It's not that easy to get it back!