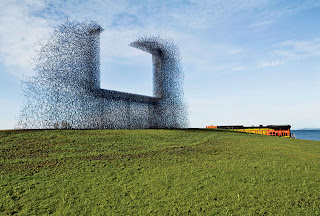 The observant reader will note a little change to my title. As of January 1, 2012, the title of this blog is no longer "Two Worlds / 365." Now, it's just plain "Two Worlds." The way this blogging program works, the title change I make today reaches back in time, and retrospectively alters the title under which I have made every past posting. There have been, incidentally, 736 such postings, not counting this one.

Originally, my blog was titled "Abrazos / 365," with reference to a favorite book by Eduardo Galeano. I began the effort in January of 2009, but by the end of that year I had to confess that the "/ 365" part hadn't really worked out. Despite my good intentions, I just didn't get around to writing something down and posting it each day.

I did a lot better in 2010 and 2011. For the last two years, I have fulfilled my commitment to make a daily posting.

Going forward, while I am not planning to make any big changes, I am relieving myself of that "/365" commitment. I continue to think that it is helpful to consider how we live, simultaneously, in two different worlds, the world of Nature, upon which we are ultimately dependent, and a human world, which we create ourselves, and which is the immediate "reality" in which we live. I hope to continue to think about and explore the interaction of these two worlds.

I like the picture at the top of this posting, which is, in fact, an artistic exploration of the "Two Worlds" relationship. You can click on the image to get a web reference. The art work is called Non-Sign II. It was commissioned by the United States government, designed by artists Annie Han and Daniel Mihalyo, and executed by Lead Pencil Studio. It has been placed at the U.S. - Canadian border near Vancouver.

The world of Nature, upon which we ultimately depend, seems framed by (and defined by) the world that we have made ourselves.

I think, perhaps, we've got it backwards!