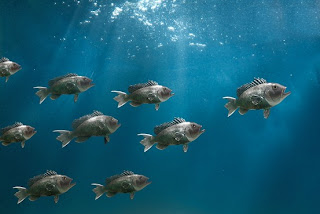 Click on the image, or right here, to read an article by Jonah Lehrer, published in the January 7, 2012 edition of the Wall Street Journal, and entitled "Why Ignorance Is Democracy's Bliss."

Lehrer's essential premise is that "ignorance is an essential feature of democratic governments." Citing a study led by Iain Couzin, a Princeton ecologist who works on collective animal behavior, Lehrer argues that "voters with weak political preferences help to prevent clusters of extremists from dominating the political process."

I actually think that Lehrer is on to something, based on my own twenty years of experience in (mostly local) politics. He puts it in a provocative way, but it is true that most people are not that engaged in or interested in politics, and that if everyone were as engaged as those who make "politics" a central part of their life, we might have a harder time than we do in reaching community consensus.

Lehrer's column cites the rise of Hitler in pre-war Germany as an example of how indifference is good, but it seems to me that this example runs against his thesis. I just finished reading In The Garden of Beasts, a fine book on Hitler's rise to political dominance in pre-war Germany, authored by Erik Larson. "Consensus" was achieved precisely because of the relative indifference of the public as a whole, at least as I read Larson's account.

Lehrer, in other words, is providing an accurate description of what really happens in politics, but in this case, as in so many others, description is different from prescription. It goes too far to suggest that widespread "indifference" to politics is a positive benefit, in terms of the substance of the political decisions ultimately made.

I take Lehrer's point, but I am going to continue to urge (as a prescription, certainly) that if we want democracy, if we want "self-government," we will have to get involved in politics and government ourselves.