#7 / We Need More Than A Good Concept 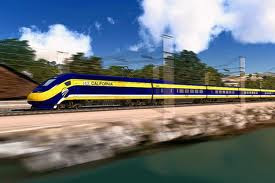 Peter Calthorpe, an eminent urban planner, has recently written a column for the San Francisco Chronicle in which he states that California “needs high-speed rail.” While "needs" is perhaps a stronger verb than I would use, Calthorpe's column makes a very good case for high-speed rail in general.

Unfortunately, the specific high-speed rail project currently proposed by the California High-Speed Rail Authority would not provide any of the benefits identified by Calthorpe. What California “needs” is more than a concept. To make high-speed rail a reality we need a project that is both financially “feasible,” and that is “reasonable” in terms of its environmental and community impacts. That’s not only common sense, it happens to be what state law says, too.

So how does the currently-proposed high-speed rail project measure up, in terms of “feasibility” and “reasonableness?” According to the High-Speed Rail Peer Review Group established by the California High-Speed Rail Authority (the state agency proposing the project), the current plan fails to be either "feasible" or "reasonable."

The Peer Review Group is made up of transportation experts selected by the Authority. Its specific responsibility under state law (Section 185035 of the State Public Utilities Code) is to “evaluate the authority's funding plans and prepare its independent judgment as to the feasibility and reasonableness of the plans, appropriateness of assumptions, analyses, and estimates, and [to make] any other observations or evaluations it deems necessary.”

In a report released on January 3rd, the Peer Review Group said the following: (1) The current project “does not appear to meet the requirements of the enabling State legislation.” (2) “The Funding Plan fails to identify any long term funding commitments … a fundamental flaw in the program.” (3) “We do not think that the current description constitutes a ‘feasible’ business model… (4) “We cannot characterize the demand forecasts as reasonable.” (5) “We cannot overemphasize the fact that moving ahead on the HSR project without credible sources of adequate funding, without a definitive business model, without a strategy to maximize the independent utility and value to the State, and without the appropriate management resources represents an immense financial risk on the part of the State of California … The Peer Review group cannot at this time recommend that the Legislature approve the appropriation of bond proceeds for this project.”

This is a "two thumbs down" assessment from the experts selected by the Authority itself. Neither the Authority, nor the Governor, seems to be too perturbed that the specific plans being proposed, which will cost us $6 billion, incidentally, are fundamentally flawed. Why is that? I think it's because so many people think we "need" high-speed rail, and it's the "concept" that is appealing.

The High-Speed Rail Authority has consistently urged support for its specific plans based on the idea that high-speed rail is a wonderful idea in general. Maybe it is (though I have increasing doubts), but we need more than a “concept” in place before we spend $6 billion. We need a plan that would actually work, that is financially feasible, and that is otherwise reasonable. The current plan doesn’t cut it.

I have been following high-speed rail issues for about three years, working with farmers in the Central Valley and residents on the San Francisco Peninsula. I can testify that the High-Speed Rail Peer Review Group is not comprised of NIMBY naysayers. It is not part of a political plot to embarrass the President or the Governor. The Peer Review Group is not against the "concept" of high-speed rail, either. In fact, it supports that concept. But the Peer Review Group demands (and we should demand) that the State come up with a plan that is both “feasible” and “reasonable” before we spend $6 billion dollars just because we “like the idea” of high speed rail.