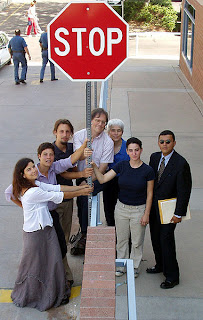 I have been thinking about how the 99% party might be able to recapture control of the ship of state, and start driving its own bus. One thing that comes to mind is the "Affinity Group." According to Wikipedia:

An Affinity group is usually a small group of activists (usually from 3-20) who work together on direct action. Affinity groups are organized in a non-hierarchical manner, usually using consensus decision making, and are often made up of trusted friends. They provide a method of organization that is flexible and decentralized. Affinity groups can be based on a common ideology (e.g., anarchism, pacifism), a shared concern for a given issue (e.g., anti-nuclear, anti-war) or a common activity, role or skill (e.g., legal support, medical aid, black blocs). Affinity groups may have either open or closed membership, although the latter is far more common.

The origin of Affinity groups dates back to 19th century Spain. It was the favorite way of organization by Spanish anarchists (grupos de afinidad), and had their base in the tertulias or in the local groups.

Affinity groups appeared again in the U.S. anti-war movement of the 1960s and 1970s. Anti-war activists on college campuses organized around their interests or backgrounds -- religious, gender, ethnic group, etc. They became popular in the 1970s in the anti-nuclear movement in the United States and Europe. The 30,000 person occupation and blockade of the Ruhr nuclear power station in Germany in 1969 was organized on the Affinity group model. Today, the structure is used by many different activists: animal rights, environmental, anti-war, and anti-globalization, to name some examples. The 1999 protests in Seattle which shut down the WTO Ministerial Conference of 1999 included coordinated organization by many clusters of Affinity groups.

The spontaneously-generated community organizations that transformed Santa Cruz County politics in the 1970's and the 1980's were actually "Affinity groups," though they didn't use that name. The system works. I know it from personal experience.

By the way, the movie Battle In Seattle gives a good sense of what went on during the 1999 WTO protests. It's available on DVD.