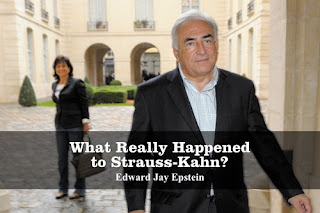 The New York Review of Books has just published an article titled, "What Really Happened to Strauss-Kahn?" Click the link or the image to go to the article.


If you followed this story at all, which revolves around events occurring in May 2011, and the arrest, in New York City, of a major candidate for the French Presidency, you will likely be entertained, or even enthralled, by this new perspective on the story. I was, at least.

I am not sure whether the article has a specific "purpose," other than to inform and to titillate, but it certainly raises the possibility that politics (in France, and inferentially in the United States) is significantly influenced by conspiracies operating at a high level.

I am somewhat susceptible to "conspiracy theories," where politics is concerned, but only to a degree. I think that there are conspiracies, and that they do impact events, and history, and therefore the world we create; however, I also think that the ultimate decisions about our future, and the events that ultimately matter, are not determined by "conspiracies," but by the choices made by ordinary men and women. In fact, I think a belief that conspiracies are the main determinant of what happens in politics probably makes democratic self-government impossible, because if democratic political actions are always trumped by the conspiracies of those in power, what's the point of democracy?

Lots of people, consciously or not, have undoubtedly decided that the conspiracies do prevail, and that there is not, in fact, much point in what we call "democracy." As I say, I continue to resist this plausible conclusion. I definitely do not refer to the "What Really Happened to Strauss-Kahn?" article to advance a conspiracy thesis.

The article's immediate impact was to make me sympathetic to Strauss-Kahn. Even assuming that everything the article says is true, however (which is probably not a wise assumption), I note that Strauss-Kahn's account has him utilizing a mobile telephone that he believes is likely "bugged," or jiggered with in some way, and that since he doesn't deny having sex with the hotel worker, he is the kind of guy who will have sex without any knowledge of the person with whom he is engaging, more or less as opportunity presents itself. If these are accurate observations, and that is what the article seems to say, then Mr. Strauss-Kahn is definitely arrogant, since his conduct as portrayed in the story shows that he doesn't think that "anyone can touch him," despite the fact that he is "living dangerously." Arrogance is not a good thing in a President or political leader. At least not in my opinion.

As for conspiracy theories, I don't discount them, but I will defy them. I just won't admit that the rich and wealthy conspirators who are arrogant enough to think that they can run the world, will ultimately run mine!