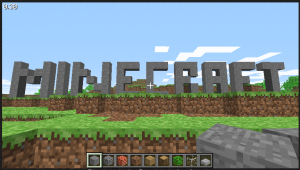 I have never played Minecraft, a computer game that has apparently become a "global phenomenon." That's the claim, anyway, of technology reporter Chris O'Brien, who writes for the San Jose Mercury News. O'Brien self portrays as a non-computer game type person whose "every waking thought" is now dominated by Minecraft. Download and start playing the game at your own risk, I guess. I already have lots of "waking thoughts," and ones that I think should have priority over computer games.

I was most interested in O'Brien's explanation of why the game is so compelling: "The game has won legions of fans thanks to its deceptive simplicity. Rather than walking into a virtual world where all the spaces have been filled in by a developer, Minecraft introduces a world that is a blank canvass where players build just about everything...."

If we think about the reality of our human situation and history, as opposed to computer games, human beings originally walked into a world of Nature that was essentially a "blank canvass," and we have succeeded in building just about everything that now exists.
It is just as possible, in our world, in the human world that we create, to change the results of our past work into something different, and something new. I wonder if the same principle applies in Minecraft? Doing that, creating something genuinely new in the world we have already built, would not be "simple."

It would, however, be possible. Figuring out how to do that is where I am directing most of my "waking thoughts."