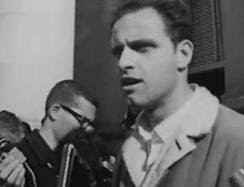 Mario Savio, pictured on the steps of Sproul Hall, at UC Berkeley, in 1964, is probably best known for his passionate speech on the "operation of the machine." You can hear and see his speech by clicking the link.

Savio's words mobilized the Free Speech Movement at Berkeley, and electrified the Stanford campus, too, where I was in my final year of college. Here are his memorable words:

We have an autocracy which runs this university. It's managed. We asked the following: if President Kerr actually tried to get something more liberal out of the Regents in his telephone conversation, why didn't he make some public statement to that effect? And the answer we received -- from a well-meaning liberal -- was the following: He said, "Would you ever imagine the manager of a firm making a statement publicly in opposition to his board of directors?" That's the answer! Now, I ask you to consider: if this is a firm, and if the Board of Regents are the board of directors, and if President Kerr in fact is the manager, then I'll tell you something: the faculty are a bunch of employees, and we're the raw material! But we're a bunch of raw material[s] that don't mean to have any process upon us, don't mean to be made into any product, don't mean to end up being bought by some clients of the University, be they the government, be they industry, be they organized labor, be they anyone! We're human beings!

The Occupy Movement, it seems to me, speaks in a somewhat different tone, perhaps less strident, though plenty of anger is apparent. But what the 99% are really saying is that the 1%, those who have managed the machine for their own benefit, and who have treated ordinary people as though they were the raw material of a wealth producing system for those at the top, must not be permitted to continue in their "management" positions. We, the people, are in fact human beings, and not material, and must no longer allow ourselves to be picked up or discarded, and rewarded or dismissed, as the managers of the machine so choose.

The world we create should be built to benefit all of us.