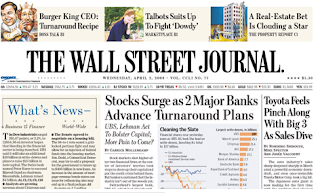 In a column published in the Thursday, November 8, 2011 edition, David Wessel, a Bureau Chief for the paper, pondered whether or not the U.S. was "ceding" its "creative edge."

I was struck by the internal inconsistency of the Journal's concern about our "collective" position in the world. The column addressed the question of how our nation was doing, as a nation, in terms of technological innovation and world economic leaderrship. For me, that does seem to be a legitimate inquiry. However, isn't it odd to hear about this concern from a newspaper that does not seem to believe that the "nation" has any obligation to the individuals who make it up (the 99%, to use the now current way of referring to ordinary people)?

I don't think we can have it both ways, actually.

Either we are, or we are not a collective "we" (a "nation" to use one way of talking about our collective existence). If we are not a collective "we," and are just a number of individual "persons" who happen to be residing, more or less, in the same geographical area (including, of course, those "corporate persons" that the United States Supreme Court has conjured into being) that leads to one way of handling public policy. In fact, it leads to the kind of public policy that The Wall Street Journal so routinely espouses.

On the other hand, if we are actually a collective "we" (and that is what I believe), then the question posed by David Wessel is totally legitimate, but so is the question whether our nation shouldn't provide health care, decent housing, and a good education for the individual persons who make up this collective, and even posing the question implies that the answer is "yes," and that we should be willing to mobilize our collective wealth to achieve collective goals.

It seems to me that The Wall Street Journal wants to have it both ways.

I don't think we should let either the paper, or our elected officials, get away with that.