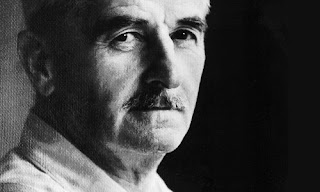 In my closet, I have a copy of a news article that I received from my father, who had pinned this very same article to his closet wall, too. The article was published shortly after William Faulkner died (in 1962, at age 64). It quotes from Faulkner's speech delivered in Stockholm in December 1950, when he accepted the Nobel Prize for literature:


I decline to accept the end of man. It is easy enough to say that man is immortal simply because he will endure; that when the last ding-dong of doom has clanged and faded from the last worthless rock hanging tideless in the last red and dying evening, that even then there will still be one more sound: that of his puny inexhaustible voice, still talking. I refuse to accept this. I believe that man will not merely endure: he will prevail...