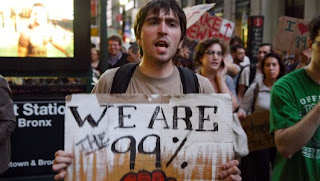 The top 1% of Americans control 42% of the nation's financial wealth. 93% of the wealth of the country is controlled by the top 10%. UCSC professor Bill Domhoff is cited as a source of these statistics. I think they're probably accurate.

The Occupy Wall Street movement, now proliferating into "Occupy .... (name your local community)" says, "We are the 99%." People like Mitt Romney, running for President as a Republican, call this claim "class warfare." Some commentators think that class warfare is a good thing, as long as no actual "warfare" is involved.

Here's what I think (and what I don't think). I do not think that military metaphors will get us where we need to go. The greatest community organizer and political leader in the United States during the last 100 years, Martin Luther King, Jr., campaigned for a nonviolent methodology as the best way to make the mammoth economic and social changes that are demanded of us. The "class warfare" claim is bogus. The "class warfare" approach should be expunged from our consciousness, even as we prepare to make the change.

I do think that the "We are the 99%" statement is right on point. What I like about it most is the "We."

Who am I? Who are we? "We" is who I am, and who we are. We are not just a bunch of individuals; we are in this life together. In the United States of America, the wealth of the nation is prodigious, and it is ultimately "our" wealth. We all helped create it, and it doesn't "belong" to the 1% or the 10% who largely assert control over it. That wealth should be and must be deployed to benefit the collective "we." No "warfare" should be required, since the 99% are not claiming anything that belongs to anyone else.

This land is our land, and this land (and its wealth) belongs to you and me. Some hobo songwriter said that. It's about time we acted on the insight. Let's self-insure and have health care for everyone. No insurance company intermediaries need be consulted. Let's give people their homes back; they were stolen by that 1%. And let's give housing to those who haven't had any. And education for everyone.

This land belongs to you and me.