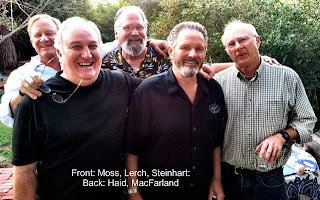 I recently attended the 50th reunion of my high school class. It was quite an occasion for nostalgia.

The Class of 1961 at Palo Alto High School sent lots of students across the street to Stanford. Some of the people showing up for the reunion had been my classmates since 1st grade, at Walter Hays Elementary School, and we'd been together right through college. The first girl I ever wanted to kiss (but didn't get to), and who ultimately married (and then divorced) Jerry Garcia of the Grateful Dead, showed up for the reunion. I really hadn't seen her since Stanford.

Brooks Hodapp reminded me that we had last been in contact when we were both walking down Pacific Avenue, right after the earthquake, assessing the damage, and wondering whether our downtown would ever recover. As I recently noted, it did!

Brooks told me that he moved from Santa Cruz to Ashland, Oregon shortly after we last made contact in the ruins of the Santa Cruz downtown, and that he has kept in touch with Santa Cruz, and with what I'm doing, by reading Bruce Bratton's online column every week. Brooks also reminded me that he was the person who displaced me as quarterback and captain of the Walter Hays flag football team. I'd forgotten his role in this, but I hadn't forgotten the facts. I went into a steep decline after the Fifth Grade, which is pretty much when my life peaked, or so I believed until recent times. In the Fifth Grade, I was the captain and quarterback of the Walter Hays championship flag football team. I got my picture in the paper, and was a celebrated leader. In the Sixth Grade, I couldn't even make the team. Socially speaking, at least, it was all downhill from there, and I did not much identify with high school, all the way through: too short, too small, too socially inept.

Apparently, I was also a lawyer in the making, way back in elementary school. Bob Langfelder, one of my friends, told me at the reunion that Mr. Henry, our Fifth and Sixth Grade teacher, decided at one point to deal with disciplinary problems in the classroom by instituting jury trials (by the class). Bob had stabbed William "Kedzie" Sargent in the hand with a pencil. Kedzie was also a friend of mine, though he kind of stopped being a friend at one point, and I never knew why. Now, I'm guessing, I do. Bob told me at the reunion that I served as his defense attorney in the Clay Henry Classroom Trial of the Century, and that I got him off. I certainly didn't remember that. I always attributed my interest in being a lawyer to the Palo Alto High School "Career Day" presentation made by Pete McCloskey, then a young attorney from the Palo Alto vicinity and later a courageous Congressman who opposed the Vietnam War. A movie about Pete, called Leading From The Front, is well worth seeing.

The Paly Class of '61 50th Reunion was held at the Los Altos Golf And Country Club. That was another occasion for nostalgia. My parents belonged to the Club throughout my youth, and I was there almost every weekend, learning how to play golf and swimming. The swimming pool is gone, and I quit playing golf at the age of twelve, after losing my first tournament, but it was great to be there at the Country Club. My parents loved golf, and in the last part of their lives they moved first to Rancho Mirage, and then to Boulder Creek, so they could live right on a golf course.

Probably the biggest "celebrity" in the Paly Class of '61 is Charlie Haid, TV actor and movie star. He is pictured, above, along with some other guys I more or less know. Charlie was one of the "in" group (from my perspective, anyway) in high school, and he made the keynote speech at the reunion, truly evoking the nostalgic spirits of the past in his remarks. I was kind of dreading the reunion, but I forced myself to face it, and as you can probably tell, I am glad I did. Nostalgia, I think, is always bittersweet. It's like dark chocolate. I am reliably informed that Scharffen Berger makes the best dark chocolate (though not the least expensive), and that dark chocolate is good for your health. Well, a little bit, anyway.

A little bit of nostalgia is good, too. That's my report.