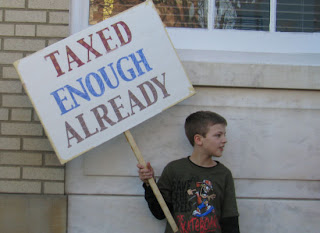 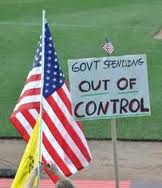 Such a debate is not, in fact, an aberration in our democratic society.

One of the central purposes of government is to tax and spend, and since political debate must precede democratic decision making, it is fully appropriate for Americans to be preoccupied with questions about taxing and spending.

I only object to the idea (apparently ever more popular) that it is somehow wrong and illegitimate for the government to take money away from individuals, and to spend it for something that doesn't, perhaps, directly benefit the individuals who have been taxed.

If we were only individuals, and nothing more, then there might be a good argument against taxing individuals, and taking their money without their individual consent. But we are not simply individuals. We are part of a greater whole. In fact, our democratic system is premised on the idea that governments are required to secure our individual rights. These words may seem familiar and state the principles involved:

All [persons] are created equal ... [and] are endowed by their Creator with certain unalienable Rights, that among these are Life, Liberty and the pursuit of Happiness. That to secure these rights, Governments are instituted ..., deriving their just powers from the consent of the governed.

But it is also legitimate - totally legitimate - for a representative and democratic government to tax individuals and to direct the money so generated to carry out what the majority think is the best thing for the community as a whole.

Let's be careful that we don't misdirect our arguments. Taxation is not "theft," and we had better be prepared to raise money and spend it, if we want a government that is truly able to govern. In my view, we are coming perilously close to contracting the democratic and political equivalent of an auto-immune disease.