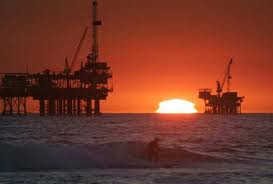 "Revenue sharing," as it is called, is one of the selling points that the oil companies are now using to advance their plans to drill off the nation's coasts. They tried that "revenue sharing" pitch in California (with then Governor Schwarzenegger's approval), but the effort failed. Now, they are trying it again, in Virginia, where the Governor of that state seems to be "taking the bait." If you'd like to read about it, you can click this link to see how Virgina Governor Bob McDonnell is trying to sell the concept.

In essence, the idea is that the state government would share the revenues from new offshore oil production - revenues that would otherwise be divided between the federal government and the oil companies. Once they get their "cut," the states go from opposing to supporting new offshore oil development. At least, that's what the oil companies hope.

There are lots of problems with offshore oil drilling. Spills and blowouts, as we have learned in the Gulf, and as we found in Alaska, when the Exxon Valdez went aground, are just a couple. The overarching problem, of course, is global warming. Every new discovery of more oil to burn is not "good news" but "bad news," insofar as the future of human civilization is concerned. Somehow, we haven't internalized that yet.

What I thought about, after reading the McDonnell press release, was that the "revenue sharing" concept is actually a suggestion that we can sell off the assets of the Natural world, to benefit things we want to do in the human world. In a very "pure" form, the concept shows how we have gotten our polarities reversed. We actually need to accommodate our activities in the human world to the natural environment, upon which our lives ultimately depend, and not fool ourselves into thinking that the human world is "primary" rather than "secondary."

That is, that's what we need to do if we want our civilizations to survive!