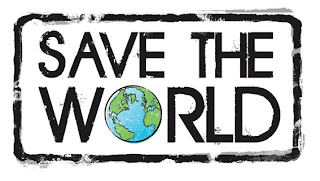 Daniel Quinn, in his books, is seriously trying to "save the world." I am definitely in favor of that, as a life purpose. No irony is intended. The followers of "B," the lead character in The Story of B, understand that this is B's objective, and Ishmael, Quinn's gorilla hero, makes it even more explicit, advertising as follows (in My Ishmael):

TEACHER seeks pupil. Must have an earnest desire to save the world. Apply in person.

At one point in his writings, Quinn makes clear that his analysis is based on a "one world" theory. There is no distinction between the world of human creation and the world of Nature. Everything is part of Nature.

My thought, of course, is somewhat different. It's absolutely true that everything that exists is ultimately dependent on the world of Nature, and in that sense there is only "one world." I think it is indisputable, however, that humans also create a world of their own, which can be called "civilization," and that our powers are such that we can now go beyond the mere rearrangement of the elements we find in the natural world, as we actually create new substances and compounds, totally synthetic, that are not only different from those found in the natural world, but that are totally antithetic to it.

The plastic pollution of the marine environment is one good example, and a consequence of the creation of synthetic materials that don't conform to one of the most important of the laws of Nature: our synthetic creations are designed never to die. Much of the impetus for the creation of the human world that seeks to be different from the world of Nature probably comes from our human disinclination to subject ourselves to the rule of death. We don't identify with the world of Nature, in which we are part of a totality that lives forever, though the "individuals" within it do not. Our efforts, in our world, are not to be part of an ongoing process of birth, death, and rebirth, but an effort to stop that process one way or another, so that our own creations are imperishable. A lot of theology is an exploration of these questions.

But, back to my title. "Which" world should we save, if we in fact do live simultaneously in "two worlds?"

It is not our place to "save" the natural world. Any effort to chart this as a major purpose is to perpetuate the human arrogance that assumes that we are the Creators of the world in which we ultimately live, instead of creatures within it. And as for "saving" our world, it seems obvious to me that making the purpose of our lives revolve on an effort to "save" the current version of the human world is a misplaced and ultimately futile effort.

I do believe that it is helpful to think that we live, in fact, in "two worlds," the world of Nature, upon which we ultimately depend, and a "political" world, created by human actions, which is the world we most immediately inhabit. In our world, in which anything is possible (anything that doesn't contradict the ultimate rules established by the world of Nature, of course), the issue is not "saving" what already exists, but "changing" our world better to conform to our deepest aspirations, and to the world of Nature.

It is in our human world that we do live most immediately. To "save" that world, we must "change" it, and the change needed is that we must restore a right relationship between that human world and the world of Nature upon which we ultimately depend. This is, in fact, what Quinn is calling for in his books. This is, I think, an appropriate purpose for our lives.