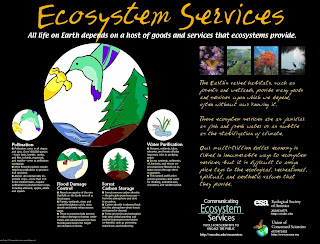 "Ecosystem services" is a phrase used to make clear that there is real "value" in the natural environment. Money value, that is!

How much would it cost, for instance, to build the necessary apparatus to clean up contaminated water, and make it fit for drinking? Left alone, our ecosystem does that without the need for any human intervention. That's valuable. "Ecosystem services" is an investigation of how much money we would have to pay to obtain the "services" that nature gives us for "free."

For those who like the concept, this is a way to build respect for nature into our economy and political life. Since money "rules" in our human world, valuing nature in terms of money helps us understand that we ought to be respectful of the natural world.

A recent posting on Legal Planet, a blog I follow, illustrates the way "ecosystem services" has entered our public debate. The British government has recently done a report giving what purports to be a full tally of the (economic) value of the U.K. environment. Legal Planet thinks that this is splendid, since even though "the British government is controlled by budget-slashing conservatives," these British politicians "nonetheless seem to value the environment, unlike their American counterparts."

All good and well, but the premise upon which "ecosystem services" is based is fundamentally flawed. It's topsy-turvey thinking, because it proposes that we value the world of Nature in terms of the primary values in our human world (i.e., in terms of money). This gets it backwards, since our human world (where money is the measure of value) is in fact totally dependent on the world of Nature.

Because that is true (and as a popular ad campaign puts it, admittedly in a completely different context) the value of Nature is priceless!

Putting a price on Nature allows us to exploit it for human ends. Our continuing efforts to exploit Nature, and to achieve through that exploitation what we think of as our human objectives, is in fact the major challenge to the continued existence of human civilization on our planet. If we keep acting like Nature is dependent on us, rather than the opposite, we're on our way out.

Read up on global warming, if you don't believe me.