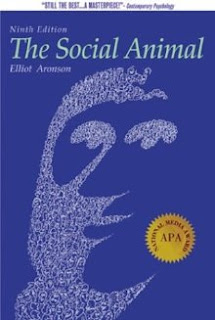 In my post #111, I commented on David Brooks' recent book, The Social Animal, which he just published this year.

Long before Brooks wrote his book (in 1972, in fact), Elliot Aronson, now an Emeritus Professor at the University of California at Santa Cruz, authored a book with exactly that same name. Aronson's book has become a classic introduction to social psychology, and a tenth edition was just released. I haven't heard whether or not Aronson is upset by Brooks' appropriation of the title.

Wikipedia says that social psychology is "the scientific study of how people's thoughts, feelings, and behaviors are influenced by the actual, imagined, or implied presence of others." In his version of The Social Animal, Aronson definitely highlights the "scientific study" part of what he does. He is also interested in making sure that the science in which he is involved is "applied science," and that social psychology will have "practical" impacts in the real world.

One of Aronson's most recent practical accomplishments is his invention of the "jigsaw classroom," an educational technique which has had success in reducing classroom hostility, and in forging a positive and largely collaborative educational environment among students characterized by significant economic and racial diversity.

In many ways, Brooks and Aronson are exploring the same topic, so it does make some sense that their two books bear the same title. And from a practical point of view, we do need guidance and assistance on how best to cooperate and work together to create the new realities that can sustain our continued existence as a species, since the world we create is a "social" and not an individual world.