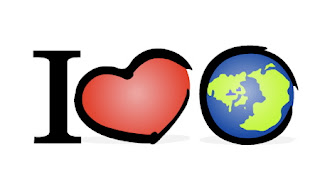 Click on the image and you'll find a blog discussing how to hold an eco-friendly Earth Day party. "Party," that is, meaning a social gathering and celebration. This year's Earth Day was just a short time back, so we could all start planning for next year.

What about another kind of party? The political kind?

Third party movements have seldom been successful in moving the needle of politics in the United States. The Green Party, for instance, hasn't made significant progress, even at the local level, and certainly not at the state or federal level.

Our political system, of course, is stacked against third party movements, and trying out different electoral approaches (like proportional representation) might help. Check out A New Kind of Third Party to explore the subject. This frequently updated blog is trying to stimulate thinking (and action) along these lines.

Even though I was an elected official for twenty years, and then was a lobbyist at the state level after that, I tend to approach politics from what I would call a theoretical, as opposed to a practical, perspective. I am nervous about politics becoming a "career option," or a kind of "game," or "entertainment," as I think it has largely become, almost everywhere in the United States. It may take popular movements elsewhere, like the demonstrations on Tahrir Square, to reacquaint us with the profound moral issues that are what any genuine "politics" is all about.

Politics is the way we, together, make decisions about what we are going to do, and about what sort of world we are going to create and sustain. If not motivated by profound commitments to particular principles, principles that demand that we sacrifice "our" lives for the greater common purpose, our political parties become the vehicles of personal advancement and individual and group enrichment. What that kind of politics has done for income inequality in our nation is just now drawing attention. Both major parties have participated in the destruction of a sense of national commitment to a common goal, in the name of advancing those who have mobilized their financial resources to turn public policy to their personal advancement. The corporations win, and the "politicians" sell out the public interest for sums so paltry that it defies belief.

Our future is very bleak, in my opinion, unless we realize how much we must act, together, using the tools of politics, to restore a right relationship between the world of Nature that ultimately sustains us, and the world that we create - a world that is, at base, "political."

Maybe a political party that specifically identifies itself with the Earth could help focus our attention, and help us make the fundamental changes in our personal lives, and in our economy and society, that we desperately need. Maybe a new party, identified with the planet that sustains us, and that mandates a "global" as opposed to a national approach to political questions, could help us turn our good intentions into a tough-minded and concrete program of political action. That is, in the end, what that politics should be about.

Maybe it's time for an Earth Party. We need to do something!