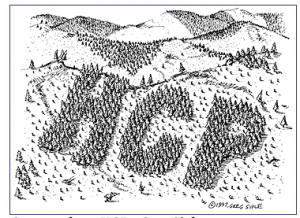 The term "Habitat Conservation Plan," or HCP, makes it sound like it's a pretty good thing.

It's all about "conserving habitat," right?

Well, not exactly. The illustration gets to the problematic aspect of the process.

Under the federal Endangered Species Act (and under the comparable California law) it is illegal to kill any individual member of an endangered species. It's called "taking," but "taking" means "killing." And the killing can be done directly, as by firing an arrow through a California condor, or indirectly, by destroying the habitat upon which the endangered species depends.

Pretty reasonable from the point of view of members of the endangered species, but definitely not good news for the developers.

Enter the "Habitat Conservation Plan." This is a plan that does aim to "conserve habitat," but only so the non-conserved areas can then be developed without reference to any killing that the developments there might cause. Once again, check the illustration. That's what it's all about.

Looking at it from the point of view of a member of the endangered species, about to be killed, society is saying, "I am sorry that you've got to go, but there's lots of habitat out there for the rest of your kind."

Unfortunately, there is no guarantee that the habitat out there, supposedly "conserved," will actually be sufficient or appropriate for the species that is endangered. It is supposed to be, but if it turns out that it isn't, it's too bad for the endangered species.

The developers get a guarantee.