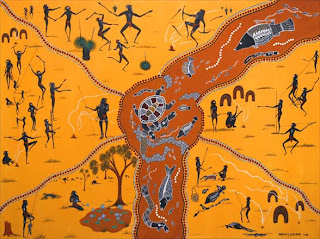 About a week ago I watched director Peter Weir's movie The Last Wave. Central to the plot is the aboriginal Dreamtime that I had first heard about many years ago, in a song recorded by Martin and Jessica Simpson. The song can be found on their album Red Roses.

The Last Wave is about a lawyer who defends a group of aborigines in a murder case, and who finds himself able to have contact, in some way, with the aboriginal Dreamtime. The movie reminded me of another song, too, A Hard Rain's A-Gonna Fall, one of Bob Dylan's most powerful songs of warning and retribution:

A Hard Rain's A-Gonna Fall was written in the summer of 1962. Weir's movie was fifteen years later, in 1977. Makes me think of another Dylan lyric:

Well, now time passed and now it seems
Everybody's having them dreams ...

The aboriginal Dreamtime is the time of Creation, when the rules and the laws were set. We'd better get back to that, and to those rules and laws.

Or watch out for the waves that, even now, are building their power.
That even now are on their way ...