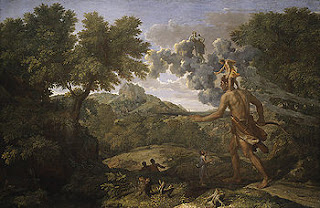 I can't remember when I first heard it said that we are like dwarfs "standing on the shoulders of giants." I probably heard it from my father, who did like to talk with his eldest son about philosophical issues; most particularly, he tried to inculcate the idea that "anything is possible," as a counter to my relentlessly negative inclination to say, in every moment of difficulty, "I can't do it."

I continue to treasure my edition of As A Man Thinketh, by James Allen (with apologies for the sexist construction of the title). This book pretty much encompasses the gist of my father's main point. As for the "shoulders of giants," if I got that phrase from my father, it was probably a comment peripheral to the main point that my father was making. The observation, though, definitely deserves its own place in a complete compendium of helpful insights. I believe it!

I do note that the title of the image I'm incorporating (Cedalion standing on the shoulders of Orion from Blind Orion Searching for the Rising Sun, by Nicolas Poussin, a 1658 painting, oil on canvas, currently kept in the Metropolitan Museum of Art), indicates that there may be a few legitimate questions we ought to pose about this well-known characterization of our place in the evolution of our human world.

First, if we are riding on the shoulders of a blind giant, query how much advantage we really gain. Furthermore, the height of the "giant" is equivalent to the "momentum" that carries us forward through history with a seeming inexorability of destination, when we know (at least it seems so theoretically) that we are free to choose another course. This phenomenon is one I have talked about before, in connection with an exploration of the metaphor of "steering the ship of state." Using the "giant" metaphor, once we are up so high, the practicality of getting down to the ground and taking off in a whole new direction, on our own two feet, becomes a lot more difficult to accomplish. Thus, there are some disadvantages, as well as advantages, to finding ourselves located on the shoulders of the the giant of past choices. Particularly if the giant is blind!

Second, to the degree that the important and original point is that the dwarf can see a little further than the giant (but of course only because of the contribution made by the giant, allowing the dwarf to mount upon its shoulders), isn't the whole metaphor "off" just a bit. The real situation isn't one giant/one dwarf. It's a dwarf standing on the shoulders of another dwarf, standing on the shoulders of yet another dwarf, and it's dwarfs all the way down. If that, in fact, is a more accurate depiction of the reality that the metaphor is trying to synopsize, then the stability of the platform from which we are currently operating may be less than we imagine.

As for a third problematic aspect to the metaphor .... tune in tomorrow!