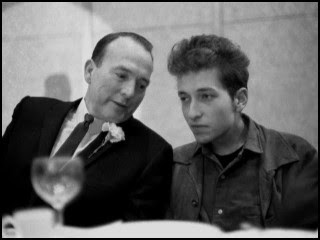 On December 13, 1963, Bob Dylan was given the Tom Paine Award by the National Emergency Civil Liberties Committee. This was obviously a very high-flying group of well-intentioned people. Quite liberal, I'm sure, and many of whom may have been named "Mr. Jones," though I actually don't know anything about that. It just seems like they might have been.

I don't believe that the National Emergency Civil Liberties Committee is still in existence. It is my personal opinion, however, that there ought to be some committee in existence that might take up the job of focusing on the civil liberty emergencies both here and abroad that continue to be rather troubling to those who adhere to the Tom Paine tradition.

I am, indeed, talking (among other things) about the recent conduct of the United States government towards Bradley Manning, a Private in the United States Army. The government seems to be of the opinion that Private Manning may have been giving out actual copies of (embarrassing) public documents, which could be some sort of a crime, I suppose, but doesn't seem to warrant psychological torture, even by way of punishment, much less as the way the government ought to treat its pretrial prisoners. In fact, the United States government is treating Private Manning (and lots of other people, it appears) more or less the same way that the Redcoats of Old King George treated the British subjects living in the American Colonies shortly before the Revolution.

Contrary to the fate of the National Emergency Civil Liberties Committee, I am happy to report that Bob Dylan is still is in existence, and is still giving concerts all around the world, but apparently he has sung his song about Tom Paine in public only once.

Tom Paine may be a sore subject. You can read about that 1963 awards dinner right here. It's quite a story.