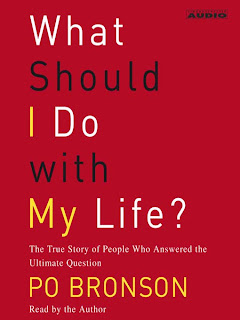 Bronson, it seems, has found his own vocation, his own shtick, in pursuing this question on behalf of the public, writing up mini-biographies of individuals he has sought out in his investigation of how we are all answering this fundamental inquiry. In a follow up book, Why Do I Love These People?, he more or less reframes the investigation in the arena of the family.

I was surprised, as I read What Should I Do With My Life?, that there were essentially zero examples, among the 50 or so people Bronson featured, of persons who had decided that they should use their life to collaborate, with others, to create what I have called a new "political world." A few of Bronson's subjects did report on some sort of political involvement in their personal lives, but this book assumes that the "answer" to the "Ultimate Question" is an individual answer (or maybe an answer found in the family arena - since I have not actually read Why Do I Love These People?). It seems clear, however, that Bronson doesn't see "politics" as a source of ultimate meaning.

No charge, Mr. Bronson, but that's my suggestion for your next book. Check it out!