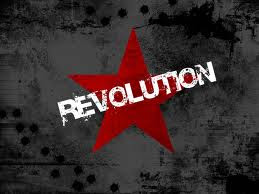 I am a proponent of revolution (properly understood) as the proper aim of a legitimate politics.

I "properly understand" revolution from having read (many times) On Revolution, by Hannah Arendt.

It strikes me that the early Quakers, in fact, were carrying out a rather revolutionary agenda. One without guns. One without violence (at least none that they practiced against others).

Those interested in exploring whether a revolutionary politics of "now" is actually possible, might well study just what the early Quakers were about.