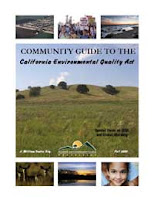 CEQA, the California Environmental Quality Act, is really a "good government act" for California. Its requirements are procedurally simple, and easy to understand.

If a government agency proposes to take an action that might have an adverse impact on the environment, the agency must first prepare, and then consider, an Environmental Impact Report, or EIR.

The Final EIR is a volume including the Draft, the Comments, and the Responses to Comments. That is the document that must be read and considered by agency decision makers, before taking action.

In summary, CEQA forces governmental decision makers to "think about" what they are proposing to do, before they actually do it, and to document in writing what the likely consequences of a proposed action might be, before (not after) the agency takes the action. That is, of course, what "good government" demands.

It is hard to believe, but it is absolutely true that if CEQA didn't mandate this kind of logical and publicly inclusive "thinking process," virtually no government agency would go through these steps. The agency decision makers would simply assume that they "knew" what was the "right thing to do."

And if they were wrong? Well, we'd all find out about that later. Thanks to CEQA, we're much more likely to find out about possible problems in advance, so we can avoid the problems!