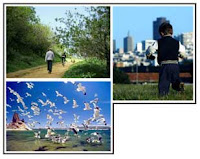 Next Tuesday evening, April 13th, I am making a presentation to interested persons from the San Francisco Peninsula. The event is being billed as "EIR 101," and it is all about how ordinary members of the public can make use of the California Environmental Quality Act (CEQA) to influence governmental decision making.

The program in which I will be participating is being sponsored by the Community Coalition on High-Speed Rail, a grassroots organization of local business people and residents who are concerned about the impacts that the construction of a High-Speed Rail project might have on their local communities.

What most people know about CEQA is that CEQA is the law that requires Environmental Impact Reports, or EIRs. That's certainly true, but I think the biggest effect of CEQA is to help make governmental agencies more accountable to the public.

Our government is strongly "representative" in nature. That means that the "power of the people" has been delegated, virtually in its entirety, to those representatives who have been chosen to act on behalf of the community. When I was on the Board of Supervisors, the Board called itself (and the newspapers called us) "the County." We were only five people, but as far as governmental action was concerned, we were Santa Cruz County. We had the legal right to bind everyone.

This approach to government has its positive features, of course, but the danger is that the "representatives" will not really do what the community actually wants, and that the representatives, in fact, will soon not even care to listen to what members of the community say. Anyone who has testified at a public hearing knows what I am talking about.

CEQA says that if a proposed governmental action might have an adverse impact on the environment, the government agency proposing to take the action must prepare and consider an Environmental Impact Report (EIR) before reaching a decision on what it will do. The fact that the EIR process is a three-step process empowers ordinary members of the public.

The first step of the process is the so-called "Draft" EIR, which is a detailed analysis of the government's proposal. Usually, since the government prepares its own EIR (or hires a consultant to prepare the Draft EIR for the governmental agency) the Draft EIR is rather positive about the project. But: then there is step two.

Step two in the EIR process is the right of members of the public to comment on the Draft EIR.

Step three is a requirement that the governmental agency respond, substantively, to the comments received from the public.

This three-step process means that the people's elected representatives are not allowed to "ignore" or "blow off" comments that they don't like. Governmental decision makers must respond substantively to substantive comments, and the courts will insist that they do so. If the "Draft" EIR says something that isn't true, or if there are other factors not addressed, or if there are better alternatives, then a comment that clearly demonstrates such facts must be taken seriously by the governmental agency. A response is required. Contrast this with the typical public hearing where an EIR is not required. Quite typically, members of the public make significant and substantive comments, criticizing a proposed action, and these comments are simply ignored. No response is made, whether there is a "good answer" to the concerns articulated by the public or not. Again, people who have been to a public hearing know what I am talking about.

CEQA requires the governmental agency to respond to substantive public comments and concerns. In essence, this gives any member of the public the same status as an elected official, as to the matter under consideration in an EIR. If a member of a City Council or a Board of Supervisors has a question about a proposal, the staff answers that question; if necessary, the staff will go off and do research, even hire experts, to address the issue raised. CEQA gives ordinary citizens the right to the same treatment. The courts do, by an large, insist on this. The courts will almost certainly not substitute their judgment for the judgment of the elected representatives, but they will make these representatives respond to comments and concerns presented in the CEQA process.

This actually changes the course of events. CEQA has what is called, by lawyers, a "substantive mandate." If there is a way to do something in a better way, environmentally, than what the government has proposed, the government agency must do what's best for the environment, if that can feasibly be accomplished. Using the comment power in the EIR process, members of the public have an ability to demonstrate that a proposed project should be done differently, or not at all, and the process really works.

To see some great case studies of how CEQA works to empower ordinary members of the public to change what happens in their communities, click on the picture. The Planning and Conservation League has an excellent book, available for a free download, which outlines the power of CEQA.

It's called Everyday Heroes. I recommend it.