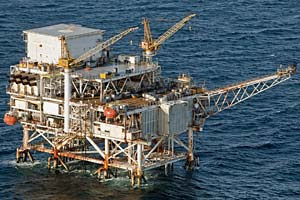 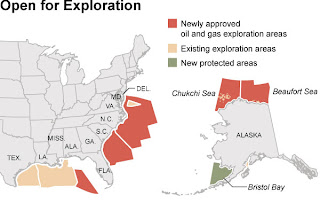 President Obama is announcing today that he and the Department of Interior will open up new areas for offshore oil drilling. The map shows where. Click on the images for news stories from the New York Times and the Los Angeles Times.

In politics, compromise is not a "goal." Compromise is what you may come to when you can't reach the goal of the policy you think is right. The federal health care reform legislation was a "compromise," because a truly "good" plan could not be achieved, given the political power realities in the United States Congress, and particularly in the Senate. I was distressed that a strong "Medicare for all" plan was not enacted, but I can't really blame the President. He made some progress.

In the case of oil, the decision is wholly the President's. He has the political ability to do the right thing, but he dictated the compromise that gives away coastal areas to the oil companies.

In my opinion, this decision indicates a basic failure to understand how to conduct yourself when you have the political ability to do something right. We need to move away from the combustion of hydrocarbons. The future of our human civilization depends on it. Finding and burning more oil (and other oily hydrocarbons, from coal to tar sands) makes our chances of doing the right thing about global warming ever smaller. In addition, of course, offshore oil drilling puts both marine resources and local economies at risk.

In Congress, we have beaten the oil companies year after year. They always want more, but the Congress, and Presidents from Bush Senior to Clinton, have said "no."

This is the President who said, "yes." It's a "change," alright. But not one I believe in.