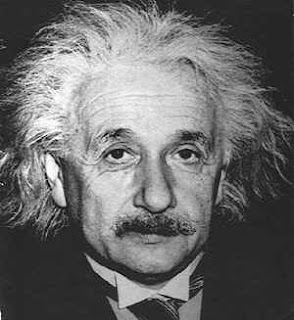 Last night, I delved into some of Einstein's writings (and books and essays about his theories), to see if I could answer a question about Einstein's famous equation:

All I really know about this equation is that it is "true," and that it means that there is a lot of energy contained in a small amount of matter, since the speed of light squared is a really big number.

I have been trying to figure this out (with no training, tools, or experience to do so), and I must say I just don't "get" how the speed of light logically fits in to an examination of how much energy there is in a given amount of matter. Maybe some of my friends who do physics can help me out. Nothing I read last night provided any illumination on this point, though I did become fascinated, again, with the implications of "Quantum Reality," and the meaning of the Special Theory of Relativity.

Nick Herbert, the author of a book called "Quantum Reality," says this about our current state of knowledge:

One of the curious features of modern physics is that in spite of its overwhelming practical success in explaining a vast range of physical phenomena from quark to quasar, it fails to give us a single metaphor for how the universe actually works.

I do want to know how the universe actually works, and how what we do in our human world fits into the scheme of things. It strikes me that finding out how the speed of light relates to the ultimate truths that define "reality" is an inquiry that might bear fruit.