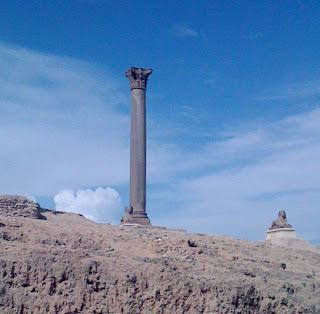 Today I went touring in Alexandria, Egypt and visited the Amud El-Sawari Monument, which is perhaps best known as the site of Pompey's Pillar (pictured).

I was most interested in the "Nileometer" (the actual name on the sign), which was a canal system that connected the Nile River to a Temple formerly located on the site (the Temple not, incidentally, actually connected in any way with the Roman political and military leader named Pompey). In effect, the "Nileometer" was a device that provided a water level measurement for the Nile to the Priests in the Temple, and this measurement was then used by the Priests to assess taxes.

Since high water levels in the Nile were directly associated with "good years" for agriculture, and thus were linked to agricultural and property income, the ancient system was a way to make taxation "progressive," i.e. increasing taxes when income increased.

Not a bad principle to try in our country! We've been heading in the opposite direction, as those who follow tax policy know.